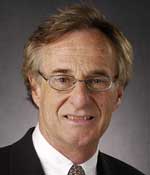 
"For pioneering contributions to understanding extreme behavior in a wide range of materials undergoing shock-compression, including deformation, fracture, phase transformations, and chemical reactions."


Marc André Meyers, Ph.D., has explored the science of shock waves for 44 years. He is the founder of the first laboratory in all of Latin America dedicated to the study of shock-wave irregularities and interactions with grain boundaries. Dr. Meyers completed his undergraduate studies in mechanical engineering at the Federal University of Minas (Gerais, Brazil) in 1969. He received his M.S. in materials science in 1972 from the University of Denver (Colo.), where in 1974 he also received his Ph.D. in physical metallurgy with the thesis, "Thermomechanical Processing of a Nickel-Base Superalloy by Shock-Wave Deformation" specifically applying to jet turbines. In 1979, while a professor at the South Dakota School of Mines and Technology (Rapid City), Dr. Meyers published the classic paper, “A Mechanism for Homogeneous Dislocation Generation in Shock Compression”. Later, as a professor at the New Mexico Institute of Mining and Technology (Socorro), Dr. Meyers co-founded the Center for Explosives Technology Research, which enabled collaborations with the Los Alamos and Sandia National Laboratories (N.M.), and several international laboratories. With Lawrence E. Murr, The University of Texas at El Paso’s Materials Research & Technology Institute, Dr. Meyers co-founded the EXPLOMET conference series. At the University of California, San Diego, where Dr. Meyers is a distinguished professor of physics, he investigated shock and dynamic effects in brittle and ductile materials for armor, and developed extensive collaborations with Bruce Remington and others at the Lawrence Livermore National Laboratory in Berkeley, California, on laser shock loading. Thanks to Dr. Meyer’s pioneering studies, there has been significant advances in the understanding of shock-induced defects, spallation in ductile metals and brittle rocks, shear banding, tensile-pulse induced martensitic transformations, high temperature shock consolidation reaction-assisted consolidation of metal and ceramic powders, shock synthesis, and shock amorphization. Dr. Meyer’s has played a leadership role in unifying the “materials science” aspects of shock compression with the “shock physics” aspects of material behavior. He is a fellow of the American Physical Society, the American Society of Microbiology (ASM), and the Minerals, Metals, and Materials Society (TMS), and the recipient of numerous American society awards, including the ASM White, Sauveur Award; the Cohen, Educator, Distinguished Engineer/Scientist, and Service awards from the TMS; and the Acta Materialia Holloman Materials & Society Award. Internationally, Dr. Meyers has been recognized with the Alexander von Humboldt Foundation’s Humboldt Prize, the Heyn Commemorative Medal from the German Society for Materials Science, the DYMAT Rinehart Award in Europe, and the Lee Hsung Award from China’s Institute of Metal Research. A member of the Brazilian Academy of Sciences and the Institut Grand Ducal in Luxembourg, Dr. Meyers is also the author of 400 papers and the textbook, ‘‘Dynamic Behavior of Materials” which has been cited more than 2,500 times and translated into Chinese.