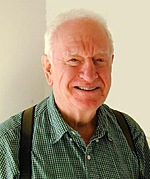 
"For his many rigorous, elegant, fearless, and influential analyses of the automobile's energy use, emissions, and crashworthiness that have inspired two generations of policy physicists."


Ross received his B.S. at Queens College (1948) and Ph.D. from Wisconsin (1952). He was assistant professor to Professor of Physics at Indiana University, 1955-1963; and professor of physics at the University of Michigan since. He nominally retired in 2001. His dissertation was with Bob Sachs in nuclear theory; and he worked in particle theory and as kibbitzer to experimentalists until 1972. During those two decades he enjoyed NSF postdoctoral and senior fellowships (Cornell and Rome), and work at Brookhaven and Argonne. He helped organize the 1974 APS study on efficient use of energy, and, in collaboration with Bob Williams, began work on energy and environmental issues. His initial focus was industrial energy use. Since 1988 he has focused on automobiles. Much of his research concerns fuel-economy technologies. He also analyzed emissions of in-use cars and created a model of emissions and driving patterns. Recently he has studied relationships among traffic safety, vehicle mass and other variables with Tom Wenzel at Berkeley (LBNL) in order to evaluate safety effects of potential changes in vehicle design. He has also enjoyed long associations with the Ann Arbor Hands-On Museum, and American Council for an Energy-Efficient Economy.