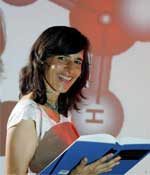 
"For her leadership of the first International Conference on Women in Physics, that changed the visibility of women in physics, and her personal commitment to supporting and encouraging women in physics around the world"

Within her research achievements one can list:  she found by computer simulations that water diffuses faster when compressed at the supercooled region and the design both by theory and experiments of a dna-lipid complex for gene therapy purposes.

In 2008 Marcia was elected  director of the Physics Institute of the  Universidade Federal do Rio Grande do Sul where she  is in charge 120 people between professors and staff.

She is vice-president in large of the International Unions of Pure and Applied Physics and the advisory editor of Physica A, editor of Papers on Physics, Topic Pages and   International Review in Physics