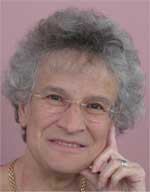 
"For her pioneering work leading to the discovery of the large-scale structure of the universe and for her extraordinary contributions to science education of diverse audiences around the world."


Margaret Geller received her B.A. (physics) from UC Berkeley in 1970 and her Ph.D.. from the Princeton University physics department in 1975. She joined the permanent staff of the Smithsonian Astrophysical Observatory (part of the CfA) in 1983.

Geller is best know for her pioneering maps of the distribution of galaxies in the nearby universe. Together with COBE observations of fluctuations in the microwave background, these maps profoundly changed the view of large-scale structure in the universe. Geller has also made substantial contributions to the study of galaxies and their environment. She has developed and applied techniques for measuring the matter distribution in clusters of galaxies. She is currently working on a deeper map of the galaxy distribution called HectoMAP.

Geller is a fellow of the APS and the AAAS. She is member of the National Academy of Sciences and of the American Academy of Arts and Sciences. She received a MacArthur Fellowship (1990), the Magellanic Premium (2008), the James Craig Watson Medal (2010), and the Russell Lectureship (2010). She is a Library Lion of the New York Public Library (1997) and she has received 5 honorary degrees.