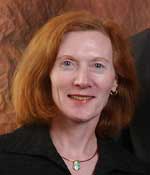 
"For pioneering work in the area of ultra-fast laser science, including development of ultra-fast optical and coherent soft x-ray sources."


Margaret Murnane is a Fellow of JILA and a Professor in the Department of Physics and of Electrical and Computer Engineering at the University of Colorado. She runs a joint research group with her husband, Professor Henry Kapteyn. She received her B.S and M.S. degrees from University College Cork, Ireland, and her Ph.D. from the University of California at Berkeley in 1989. She joined the faculty at Washington State University in 1990, moved to the University of Michigan in 1996, and to Colorado in 1999. Prof. Murnane and her group use coherent beams of laser and x-ray light to capture the fastest dynamics in molecules and materials at the nanoscale. She is a Fellow of the American Physical Society, the Optical Society of America, and the AAAS. She was elected to the National Academy of Sciences in 2004, and the American Academy of Arts and Sciences in 2006. She received a John D. and Catherine T. MacArthur Foundation Fellowship in 2000, and the Ahmed Zewail Award of the ACS in 2009. Prof. Murnane is very interested in increasing diversity in science and engineering.