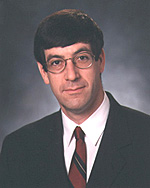 
"For his pioneering advances in the experimental study of atom optics, and especially for the insightful connections he has developed between this discipline and studies of chaotic dynamics, condensed matter physics, and dissipative quantum systems."

During the past seven years, Dr. Raizen and his group have been working in the field of atom optics. The main focus of their reseach has been to study how quantum mechanics suppresses classical chaos, by a mechanism known as dynamical localization. Recent work in his group has studied the effects of dissipation in going from quantum to classical behavior.