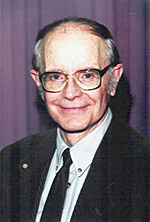 
"For his many far reaching contributions to quantum optics and quantum electronics and, in particular, for the quantum theory of lasers, for the theory of free-electron lasers and laser gyros, and for theoretical and experimental contributions to optical coherence effects."


Marlan O. Scully received undergraduate training in Engineering Physics and Nuclear Engineering from the University of Wyoming and Rensselaer Polytechnic Institute and the Ph.D. in Physics from Yale University in 1966. He has held faculty positions at Yale, MIT, University of Arizona, University of New Mexico and the Max-Planck-Institut für Quantenoptik. He presently holds a joint appointment between Texas A&M and Princeton Universities.

He has been instrumental in many seminal contributions to laser science and quantum optics. These include: The Scully-Lamb quantum theory of the laser, the classical theory of the free electron laser, the theory of the laser gyroscope and especially the theory of correlated spontaneous emission noise quenching in such devices, the first demonstration of lasing without inversion and the first utilization of coherence effects to generate ultraslow light in hot gases. Furthermore Scullys work on quantum coherence and correlation effects has shed new light on the foundations of quantum mechanics and yielded new insights into quantum thermodynamics.

He has been elected to the National Academy of Sciences, the Academia Europa, and the Max Planck Society and has received numerous awards including the Charles H. Townes Award of the OSA, the Quantum Electronics Award of IEEE, the Elliott Cresson Medal of the Franklin Institute, the Adolph E. Lomb Medal of the OSA, a Guggenheim Fellowship, and the Alexander von Humboldt Distinguished Faculty Prize.