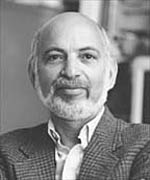 
"For his many contributions to e+e- physics, especially with the SLD detector at the Stanford Linear Collider. His deep involvement in all aspects of the project led to important advances both in the measurement of electroweak parameters and in accelerator technology."


Martin Breidenbach received his BS from MIT in 1965 and his Ph.D. from MIT in 1970. His thesis work was the first deep inelastic electron proton scattering experiment at SLAC with the Kendall, Taylor, and Friedman group. After another series of deep inelastic experiments on hydrogen and deuterium, he spent a year at CERN working with the Split Field Magnet group at the ISR. In 1972, he returned to SLAC to join the SLAC-LBL Magnetic Detector effort at SPEAR that discovered the Y and Y' in 1974. He continued on the Mark II detector at SPEAR and at PEP, until the SLC project started in 1980. He led the effort to build the SLC control system and began the conceptual design of the SLD detector. In 1984, he and Charles Baltay became co-spokesmen of SLD. He continued to play an active role in the effort to understand the SLC and coax it towards design luminosity. The SLD and SLC made the world's most precise measurements of key electroweak parameters before the program was terminated in 1998. He is now involved in NLC and its detectors.

Breidenbach is a Professor at Stanford University and a Fellow of the APS.