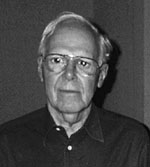 
"For his popular columns and books on recreational mathematics which introduced generations of readers to the pleasures and uses of logical thinking; and for his columns and books which exposed pseudoscientific and antiscientific bunk and explained the scientific process to the general public."

Mr. Gardiner's skill in combining mathematics, science, philosophy and literature has produced over 30 unusual books of diverse natures. His first book, "In the Name of Science", was reviewed by the San Francisco Chronicle (March 1, 1953) which noted: "Mr. Gardiner has written a highly critical and at times hilariously entertaining account of cults and fad sciences in various fields." Nearly twenty years later, Mr. Gardiner produced a "novel of ideas" that explored conflicting points of view in Protestant theology. A New York Times Book Review (December 23, 1973) published a critical review of Gardiner's The Flight of Peter Fromm and commented: "This is a brilliantly illuminating metaphysical novel that employs ideas as adversaries and translates them into human dilemmas."