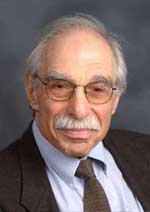 
"For his pioneering studies in the history of 19th and 20th century physics, which embody the highest standards of scholarship and literary expression and have profoundly influenced generations of historians of physics"