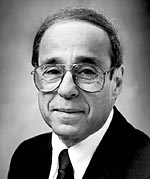 
"For his seminal theoretical elucidation of the roles of receptivity and nonlinearity in the transition to turbulence of shear flows, for his discovery that capillary force can be the source of absolute instability in a liquid jet, for his lasting contribution to aeroacoustics and rapid distortion theory and for his exemplary roles in the fluid dynamics community."


Dr. Goldstein is currently Chief Scientist of the National Aeronautics and Space Administration's Lewis Research Center. His research areas include transition and turbulence in fluids, aeroelasticity and aeroacoustics, and fundamental theory of turbomachinery. He has published 109 technical papers and wrote a book entitled "Aeroacoustics" which has been translated into Russian and Japanese.