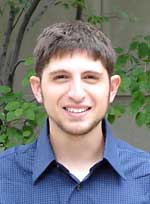 
"The Velocity Structure of MAXBCG Galaxy Clusters from the Sloan Digital Sky Survey."


Matthew Becker received his B.S. in physics and mathematics from the University of Michigan in 2007 with Highest Distinction. Under Professor Timothy McKay, he conducted his senior thesis research on the dynamics of galaxy clusters in the Sloan Digital Sky Survey. At the University of Michigan, he was inducted into Phi Beta Kappa, won the William L. Williams award for the most outstanding undergraduate thesis, received a Barry M. Goldwater Scholarship, and was a Michigan Space Grant Consortium Undergraduate Fellow. He is currently a graduate student at the University of Chicago as a GAANN fellow pursing his Ph.D. in astrophysics and cosmology.