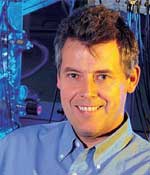 
Mike Charlton studied Physics at University College London (UCL), graduating with a 1st Class Honours BSc in 1978, before completing his PhD, also at UCL, on the interactions of low energy positrons in gases in 1980. He stayed at UCL for postdoctoral work, being awarded a Science Research Council Postdoctoral Fellowship in 1982 followed by a Royal Society Research Fellowship in 1983. He held this position until 1991, when he was promoted to Reader in Physics at UCL. In 1999, he moved to Swansea, where he took up a Chair in Experimental Physics. He has held the Chairmanship of the Department of Physics, and of the School of Physical Sciences, whilst at Swansea. He has made many contributions to low energy positron physics, particularly in the areas of positronium formation, ionization and annihilation and in the development of low energy beams and related instrumentation. He began antihydrogen research in 1986, and this is now his main area of endeavour. He is currently an Engineering and Physical Sciences Research Council Senior Research Fellow. He is a Fellow of the Institute of Physics and a Fellow of the Learned Society of Wales.