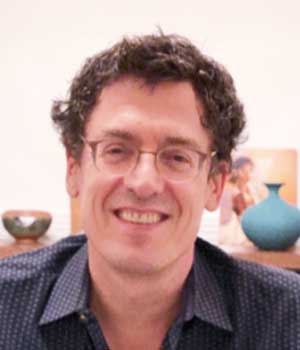 
"For outstanding contributions to understanding and controlling the fundamental electronic properties of low-dimensional systems at the atomic scale."


Michael F. Crommie is a pioneer in the study of electronic properties of nanostructures using scanning tunneling microscopy (STM). Crommie graduated from UCLA with a BS in physics in 1984, and received his PhD in physics from UC Berkeley in 1991. As a postdoc he joined Don Eigler at IBM Almaden to operate the world’s first cryogenic ultrahigh vacuum STM and helped pioneer the combined use of atomic manipulation and STM spectroscopy. Crommie’s Quantum Corral images have graced countless covers of quantum mechanics textbooks and inspired a generation of students to study fundamental science. As a professor at Boston University and later UC Berkeley, Crommie performed the first observation of the Kondo effect for a single magnetic impurity and was the first to use strain effects in graphene to create pseudo-magnetic fields. Crommie pioneered the use of gated 2D devices in STMs, integrating them with atomic and molecular adsorbates to create hybrid, atomically-precise structures that exhibit new types of behavior. He showed how different interactions compete in single-layer materials to induce exotic manybody behavior. Crommie confirmed that topological concepts can be applied to molecular materials, yielding effective new strategies to control nanoscale behavior. Crommie is the winner of the Newcomb Cleveland prize, a Sloan Foundation Fellowship, and an NSF Young Investigator Award. He is an APS Fellow and the co-director of the Kavli Energy NanoScience Institute at UC Berkeley.