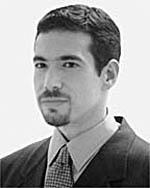 For developing novel computational diagnostics to visualize the microscopic processes controlling deformation and fracture in simulated amorphous solids, and for using the insights obtained from the simulations to develop a dynamical theory of low-temperature shear deformation in those materials.


Dr. Falk received his B.A. in physics (1990) and M.S.E. in computer science (1991) at the Johns Hopkins University where he engaged in computational physics research regarding screening in colloidal system with Prof. M.O. Robbins.

Upon returning to the United States in 1992 Dr. Falk began his graduate studies in physics at the University of California at Santa Barbara. His Ph.D. research, under the guidance of Prof. J.S. Langer, investigated the deformation and fracture of amorphous solids. From 1995-98 he was a recipient of the Department of Energy Computational Sciences Graduate Fellowship. He completed his Ph.D. research in 1998, and was chosen to serve as the graduate commencement speaker.

After completing his doctorate he accepted a postdoctoral position at Harvard University in the Division of Engineering and Applied Sciences working with Prof. J.R. Rice and Prof. D.S. Fisher on problems of crack branching and crack front waves. He was also a visiting scholar at the Center for Theoretical and Computational Materials Science at the National Institute of Standards and Technology in the summer of 1999.

Dr. Falk is a member of the American Physical Society, the Materials Research Society and Amnesty International USA. His research currently focuses on microscopic theories of plasticity, nonequilibrium phenomena in materials and the dynamics of fracture.