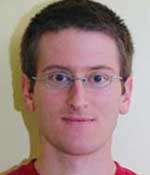 
Michael Foss-Feig was born and raised in Connecticut, and graduated from Farmington High School in 2002.  In 2006 he received his bachelor's degree with honors from Amherst College, where he worked under the supervision of Jonathan Friedman studying macroscopic tunneling phenomena in single-molecule magnets.  He then moved on to the University of Colorado, becoming a research assistant in the group of Ana Maria Rey at JILA in 2009.  His research at JILA pertained to a variety of topics in theoretical many-body physics, with a focus on exploiting the novel properties of alkaline-earth atoms, trapped ions, and polar molecules to explore interesting and/or poorly understood physics at experimentally relevant temperatures.  Since graduating in 2012, he has moved back to the east-coast as a National Research Council postdoctoral fellow, working under the supervision of Charles Clark and splitting his time between the National Institute of Standards and Technology and the Joint Quantum Institute.