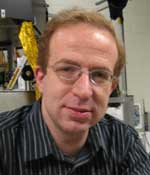 
"For using ingenious high precision measurements of spin-precession to search for a nuclear electric dipole moment and other new fundamental spin interactions, and also for using such measurements to achieve the most sensitive magnetometry to date and demonstrate its utility for research in biomagnetism and medicine."


Michael Romalis is a professor of Physics at Princeton University. He received his BS from Illinois Institute of Technology in 1993 and a Ph.D. from Princeton in 1997. From 1997 to 2001 he was at the University of Washington, first as a post-doctoral associate and then as an assistant professor. He returned to Princeton in 2002.

Romalis' research is focused on precision measurements using spin-polarized atoms. He contributed to the search for a permanent electric dipole moment using 199Hg atoms and developed non-linear spin spectroscopy techniques for EDM search in liquid 129Xe. He developed atomic magnetometry with high-density alkali-metal vapor and explored its use for detection of biomagnetism, paleomagnetism, and nuclear magnetic resonance. His work on alkali-metalnoble-gas co-magnetometers has led to new limits on violation of Lorentz and CPT invariance and on long-range spin-dependent forces, as well as applications for inertial rotation sensing. In addition to these topics, his current interests include the use of quantum entanglement for precision measurements, novel NMR detection techniques, and development of versatile techniques for ultra-sensitive atomic magnetometry.

Romalis was a recipient of the Packard Fellowship and a member of the executive committee of the APS topical group on precision measurements and fundamental constants.