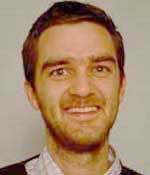 
"For work on quantum dynamics of many-body systems including long-range interactions, in particular, the development of the molecular Hubbard Hamiltonian, study of fermion pairing and formation of weakly bound molecules in an optical lattice, and implementations of numerical algorithms for matrix product states."


Michael Wall was born and raised in Huntsville, Alabama. As an undergraduate at Auburn University, he worked with Prof. Francis Robicheaux studying few-body atomic dynamics. His work with Prof. Robicheaux was honored by an invited talk at the 2006 DAMOP meeting of the APS, and also with outstanding Junior and Senior awards. During his undergraduate he also spent a summer working with Prof. Han Pu at Rice University. After graduating in 2006, he moved to the Colorado School of Mines to study with Prof. Lincoln Carr. Michael's Ph. D. research with Prof. Carr was focused in two main areas. The first was in deriving effective models that describe ultracold molecules trapped in optical lattices and identifying salient experimental signatures of many-body physics. The second was in developing generic quantum dynamics algorithms based on matrix product states, and also in open source implementation of such algorithms. Following graduation in August 2012, Michael stayed with Prof. Carr for a year as a postdoctoral fellow, nine weeks of which were spent as an invited participant at the Kavli institute for theoretical physics. He now works with Prof. Ana Maria Rey at JILA, continuing to research ultracold atomic and molecular gases.