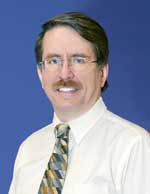 
"For demonstrating that the parellel Ohm's law in axisymmetric toroidial plasmas with impurities is governed by Coulomb collision processes, including neoclassical resistivity and the bootstrap current."


Michael C. Zarnstorff is a Principle Research Physicist at the Princeton Plasma Physics Laboratory. He was named a Distinguished Research Fellow by the laboratory in 1995 and teaches in the Astrophysics Department of Princeton University. He received his Ph.D. in Physics from the University of Wisconsin-Madison (1984). Mike is an experimental plasma physicist with interest in the basic physics of plasma confinement and configuration optimization. His research included the first observation and systematic study of the bootstrap current, investigations of neoclassical and turbulent transport, transport barriers, and the confinement and stability of different magnetic field configurations. He led the National Compact Stellarator Experiment physics group and was one of the leaders of the TFTR experimental program. He has collaborated on experiments across the US and in Germany, Japan, and the UK.