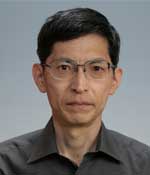 
"For profound developments in integrable systems and their correlation functions in statistical mechanics and quantum field theory, making use of quantum groups, algebraic analysis and deformation theory."


Michio Jimbo received his BS in 1974 from University of Tokyo and his PhD in 1986 from Kyoto University. During 1976—1988 he was research associate at RIMS, Kyoto University, in the group of Mikio Sato. In 1988 he became associate professor of  Department of Mathematics, Kyoto University, where he became full professor. In 2000 he moved to University of Tokyo. As of 2009 he is professor at Rikkyo University.
Michio Jimbo is known for his contributions in integrable systems, which include the Ising model and monodromy preserving deformation theory, transformation groups for soliton equations, and correlation functions of the XXZ spin chain. During the study of the Yang-Baxter equation he introduced the Drinfeld-Jimbo quantum groups. Understanding fermionic basis of local fields and their expectation values has been the theme of his latest researches.
Jimbo was awarded the Autumn Prize of Japan Mathematical Society and the Asahi Prize (both jointly with Tetsuji Miwa), the Japan Academy Prize and the Wigner Medal.