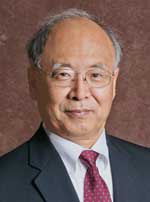 In 1968, Okabayashi took a position at the Princeton Plasma Physics Laboratory, where he has been conducting research in the area of MHD macro stability. His primary interest has been plasma stability and device performance improvement. In the late 1960's, he published numerous papers on fundamental toroidal plasma physics, discussing the advantages of magnetic well and magnetic shear using floating internal ring devices (e.g., Spherator and FM-1).

Okabayashi has been a Fellow of American Physical Society since 1983.