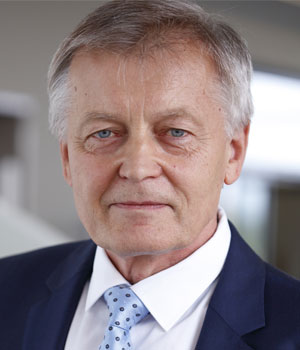 
"For pioneering studies of hydrides, a new family of high Tc materials, and for the discovery of sulfur hydrides with record value of Tc."


M. I. Eremets graduated from Moscow Physical Engineering Institute in 1973 and defended his dissertation in Moscow Institute of General Physics Academy of Sciences of the USSR in 1978. His main achievements in the high-pressure science are discovery of polymeric nitrogen and novel high energy density materials; transparent insulating state of sodium, conductive and semimetallic hydrogen. He with colleagues discovered high temperature superconductivity in hydrogen sulphide with the critical temperature of 203 K, and then in other hydrides up to the record value of 250 K in lanthanum hydride. He received the Bridgman Award AIRAPT in 2017, Ugo Fano Gold Medal in 2015. He has a Honorary Doctor Degree from Leipzig University, Germany (2016). M. I. Eremets is on the list of Nature’s 10: Ten people who mattered this year (2015). He was Visiting Professor in Research Center for Extreme Materials, Osaka University, Japan 1996-98, Visiting professor ISSP Tokyo University 2008, Visiting professor Chinese Academy of Sciences (2016). He received Advanced ERC grant award (2010). He is Member of Max Planck Graduate Centre, Member of American Physical Society (APS), American Association for the Advancement of Science (AAAS). Sigma Xi the Scientific Research Society, American Geophysical Union.