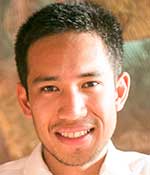 
"For the development of the heavy WIMP effective theory, which allows the most precise determination of WIMP nucleon scattering cross sections, essential for planning of future dark matter direct detection experiments."


Mikhail P. Solon received his B.S. in physics from the University of the Philippines Diliman in 2009, and his Ph.D. in physics from the University of Chicago in 2014, where he worked with Professor Richard J. Hill. His graduate studies focused on the implications of a new symmetry that appears when the dark matter particle is heavy compared to known elementary particles, and pioneered the application of modern effective theory tools for understanding dark matter observables. Key results include benchmark rates for the field of dark matter direct detection, new formalism for symmetries in effective field theory, and a precise analysis of hadronic physics relevant for dark matter phenomenology. He is currently a postdoctoral scholar at the Berkeley Center for Theoretical Physics and the Theoretical Physics Group at the Lawrence Berkeley National Laboratory, where he continues to apply effective theory tools in particle physics and cosmology to investigate the nature of dark matter.