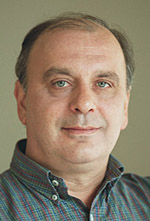 
Voloshin received his Ph.D. in 1977 at the Institute of Theoretical and Experimental Physics (ITEP) in Moscow. He has been a researcher at ITEP since 1976. He has been a professor of physics and a member of the Theoretical Physics Institute at the University of Minnesota since 1990, while continuing his affiliation with ITEP as a leading science researcher. His research topics over the years included: quantum properties of semiclassical field configurations, decay of a metastable vacuum, QCD sum rules, nonperturbative gauge dynamics, physics of heavy quarkonium, properties of hadrons with open heavy flavor, and nonstandard properties of neutrinos. His most recent work is a continuation of the studies of the properties of hadrons containing heavy quarks and also studies of properties of semiclassical field configurations. He has recieved the Academy of Sciences of the USSR medal and award in physics in 1983 and he is a Fellow of the American Physical Society since 1997.