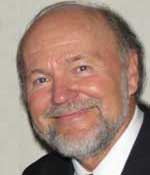 
"For developing foundational experimental and theoretical tools to enable and guide generations of experiments in relativistic heavy ion physics. The combination of experiment and theory led to the initial discoveries at RHIC, ongoing precision studies of the properties of hot nuclear matter, and to exploration of the nuclear matter phase diagram."


Miklos Gyulassy received his B.A. (1970) and Ph.D. (1974) from the University of California Berkeley. Between 1974-76 as a postdoctoral fellow with W. Greiner in Frankfurt, his interests turned to the theory of high density nuclear matter and the phenomenology of relativistic heavy ion reactions. Between 1976-92 he worked at LBNL on pion interferometry, charmonium dissociation, baryon stopping, QCD transport theory, and bulk collective flow hydrodynamics. In 1991 he developed with X.N. Wang the widely used HIJING model to predict exclusive event observables in high-energy pp, pA, and AA collisions and predicted strong nuclear modification of high transverse momentum jets confirmed experimentally at RHIC/BNL in 2001.
He moved to Columbia University in 1992 as a Professor of Physics. His group continues to develop the DGLV theory of QCD jet quenching and tomography of quark gluon plasmas at RHIC/BNL and LHC/CERN. In 2004, he proposed with L. McLerran an interpretation of the first three years of RHIC data that pointed to the discovery at RHIC of two new forms of ultra-dense QCD matter: the strongly-interacting quark-gluon plasma (sQGP) and its color glass condensate nuclear initial state (CGC). Since 2007 his group also works on testing strong coupling AdS/CFT holography modeling of heavy ion reactions. His current focus is on understanding the implications of recent data on p+A reactions from LHC and RHIC.
He received an Alexander von Humboldt Senior U.S. Scientist award in 1986 and a E.O. Lawrence Memorial award from DOE in 1987. He is a Fellow of the American Physical Society and a foreign member of the Hungarian Academy of Science. He participated in the 1983 and 1996 DOE nuclear science long-range planning committee, and has served on several national lab including Riken-BNL advisory committees.