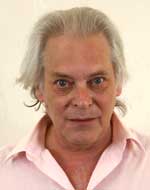 
"For developing the theory of deterministic chaos, especially the universal character of period doubling, and for the profound influence of these discoveries on our understanding of nonlinear phenomena in physics."


Mitchell Feigenbaum received a B.E.E. from the City College of New York in 1964, and a Ph.D. in theoretical high energy physics under Francis E. Low at MIT in 1970. He was also affiliated with Hermann Haus group in electrical engineering.

He was a research associate at Cornell, 1970-72, and at Virginia Polytechnic Institute, 1972-74; a staff member at Los Alamos, 1974-82; Professor of Physics at Cornell, 1982-86; and Toyota Professor at Rockefeller University 1986-present, and since 1996, Director of the Center for Studies in Physics and Biology. He has been a visiting member of The Institute for Advanced Studies and I.H.E.S.

Feigenbaums most widely known work is in nonlinear dynamics. His unanticipated discovery of the scaling theory of the onset of chaos spawned new directions in mathematics and moved dynamical systems into the world of physics. His more recent work includes research on fluids and various studies of vision. During the 1990s he worked on cartography, including the first implementation of Chebychev projections.

Feigenbaum is a Fellow of the APS, and a member of the National Academy of Sciences and the American Academy of Arts and Sciences. He received the Lawrence Award, 1982; a McArthur Foundation Award, 1986; and the Wolf Prize in Physics, 1986, among other prizes and prize lectures.