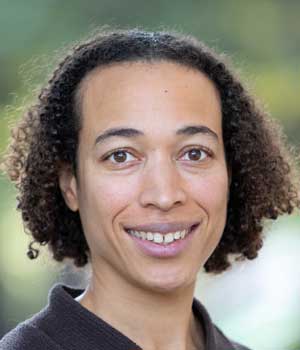 "For seminal work in quantum optics and for discoveries at the intersection of AMO, condensed matter, and quantum information, including original contributions to spin squeezing in optical cavities, engineering long-range interactions for quantum simulations, and metrology, and for theoretical development of a measurement protocol related to the scrambling of quantum information."


Monika Schleier-Smith received her A.B. from Harvard University in 2005, having studied Chemistry and Physics with a secondary concentration in Mathematics.  She received her Ph.D. in Physics in 2011 from the Massachusetts Institute of Technology. There, under the mentorship of Prof. Vladan Vuletic, she performed seminal experiments on spin squeezing to surpass the standard quantum limit in an atomic clock. She subsequently pursued postdoctoral research in the group of Prof. Immanuel Bloch at the LMU Munich and Max Planck Institute of Quantum Optics, before joining the faculty at Stanford University in 2013. Her current research focuses on advancing optical control of interactions among cold atoms, with an eye towards applications in quantum simulation and quantum metrology.  She has pioneered techniques and ideas for simulating phenomena of condensed-matter physics and quantum gravity using tools of atomic physics, and developed protocols in quantum control for entanglement-enhanced sensing. Schleier-Smith’s honors and awards include the Alfred P. Sloan Foundation Fellowship, Air Force Office of Scientific Research Young Investigator Award, NSF CAREER Award, and Presidential Early Career Award for Scientists and Engineers.