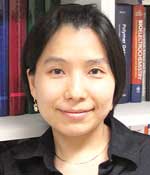 
"For incisive experiments elucidating the interplay of transport and morphology in nanostructured ion-containing polymer materials."


Moon Jeong Park, Ph.D., did her doctoral work in chemical engineering at the Seoul National University (Korea) in 2006, under the supervision of Professor Kookheon Char, before moving to the University of California, Berkeley in 2009 as a postdoctoral fellow under the guidance of Professor Nitash P. Balsara. Also in 2009, Dr. Park joined the chemistry department at the Pohang University of Science and Technology (Seoul, Korea) as an assistant professor; she became an associate professor there in 2013. Dr. Park’s main research interests are the fundamental understanding of thermodynamics and transport in charge-containing polymeric materials, with a focus on the structure-property relationships and the development of new ion/charge transporting polymeric materials that are more efficient, predictable, and sustainable for energy storage and transport. Dr. Park received the 2016 Hanwha Total-IUPAC Young Polymer Scientist Award and was named the Korean Female Scientist of 2015.