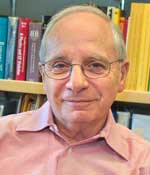 
Morris Pripstein pursued his undergraduate studies at McGill University in engineering physics where he received his B.Eng degree in 1957. He then went to the University of California, Berkeley for graduate work and earned his Ph.D there in experimental elementary particle physics in 1962, conducting his research at the Lawrence Radiation Laboratory (LRL) as it was then known.  In 1965 he returned to LRL to join Luis Alvarezs bubble-chamber research group. He was promoted shortly thereafter to Staff Senior Scientist and later became a research group leader, including that of Group A, the successor of the Alvarez Group.

He is an author of more than 350 publications and was elected a Fellow of the American Physical Society in 1991.

Since retiring from the Lawrence Berkeley National Laboratory (as LRL became known) in 2005,  he has been a program director at the National Science Foundation, overseeing its support of  the U.S. Large Hadron Collider (LHC) Program at CERN.  For two years before then, while on leave from LBNL, he held the corresponding position at the Department of Energy.

In recognition of his efforts as a cofounder of the human rights group , Scientists for Sakharov, Orlov and Sharansky (SOS), comprising more than 8,000 scientists from 44 countries, he was awarded the Heinz Pagels Human Rights Award of the New York Academy of Sciences in 1998.