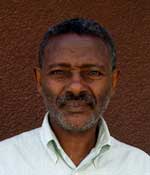 
"For tireless efforts in defense of human rights and freedom of expression and education anywhere in the world, and for inspiring students, colleagues and others to do the same."


Mulugeta Bekele did his undergraduate studies in physics at the then Haile Selassie I University (currently Addis Ababa University) and at Union College, Schenectady, NY graduating in 1970. He was employed as a Graduate Assistant during the year 1970/71 at HSIU. He then went to the University of Maryland, College Park, MD for his graduate studies for two years and received his masters degree in 1973. Mulugeta returned to Ethiopia immediately after graduation and became a Lecturer at HSIU. The Ethiopian Revolution took place in 1974 when the Emperor was removed and a military government came to power. Mulugeta was put in prison by the government for seven years. After prison, he joined his old department and continued teaching physics for the six years.

He then went to India to do his PhD at Indian Institute of Science, Bangaolre. After  six years of his stay there, he returned to AAU in 1997. He is part of a research group involved in polymer and biological physics that has been getting  support from Swedish International Science Programme as far back as late ninteen eighties. He is a founding member of the Ethiopian Physical Society and currently serving the Society as its President.