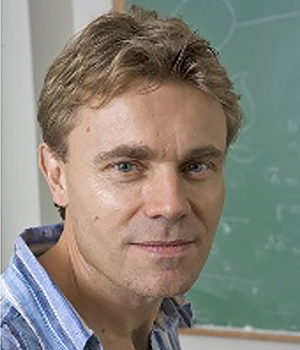 
"for his important contributions using physics to broaden scientific and public understanding of asymmetric conflict, terrorism, and instabilities in sociotechnical systems."


Neil Johnson earned his undergraduate degree at Cambridge University in 1984, in natural sciences and physics, and his Ph.D. at Harvard University in applied physics in 1989. He works in the area of complexity theory and complex systems, and is currently a professor of physics at the University of Miami where he heads up the new initiative in complex systems and networks. Until 2007, he was a professor of physics at Oxford University, having joined the faculty in 1992. His research is currently funded by the National Science Foundation (NSF) in the area of cyberphysical systems, and by the Air Force (AFOSR) in the area of the computational mathematics of many-body complex systems. His awards include The Kennedy Scholarship (1984-6); the Hartree and Maxwell Prizes from Cambridge University; ACC Distinguished Lecturer; and a Cooper Fellowship at the University of Miami. He also has been a Royal Institution Lecturer (1999). A fellow of the American Physical Society, he has more than 250 publications and two books, including Simply Complexity: A Clear Guide to Complexity Theory (Oneworld Publishing, 2009).