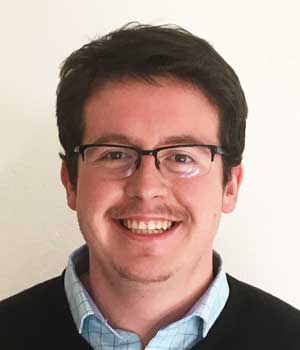 
Nicholas Sherman graduated with a double major in physics and applied mathematics and a minor in computer science, from the University of California, Davis in 2018 with highest honors where he was awarded the Saxon-Patten Award in Physics and became a member of the Phi Beta Kappa honors society.

Nicholas worked with Rajiv Singh developing and utilizing numerical techniques to study a range of problems in quantum spin systems. In particular, he studied the thermal properties of entanglement negativity in several lattice models; this work was published in Physical Review E. Also with Rajiv Singh, he studied the antiferromagnetic Heisenberg model on the Kagome lattice, with comparison to recent nuclear magnetic resonance (NMR) and neutron scattering experiments. This work lead to two publications, both in Physical Review B. He also presented this work at the American Physical Society Far West Section in 2016, and was granted the Helen-Quinn Award for his presentation. Nicholas also worked with Bruno Nachtergaele for his senior thesis in Mathematics. In this work, he developed a perturbation to the Toric Code model that introduces dynamics into the anyons of this model, and simultaneously conserves anyon number. His research on this topic is still ongoing.

Nicholas began his graduate work in physics at University of California, Berkeley in the Fall of 2018. He plans to continue working in theoretical condensed matter physics.