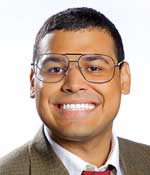 
"For important advances in the field of photonics and exceptional leadership of the Society of Physics Students."


Nicholas H. “Nick” Rivera, Ph.D., graduated with a B.S. in physics from the Massachusetts Institute of Technology (Cambridge) in 2016, serving as president of the MIT chapter of the Society of Physics Students. As a junior at MIT, his research concerned the theoretical construction and application of rare solutions of wave equations, known as bound states in the continuum. His senior thesis research focused on developing quantum electrodynamics in the context of atom-polariton interactions, raising the possibility of overcoming some of the most fundamental constraints in light-matter interactions. This work lead to four first-author publications, one in Scientific Reports and another in Science. These works combined with his role in the Society of Physics Students, have also led to two patent applications, four talks at conferences, and two MIT Joel Matthew Orloff Awards for outstanding research and for service to MIT Physics. Mr. Rivera is a member of the Optical Society of America and the American Physical Society. He is continuing his Ph.D. studies as a joint fellow of MIT and the Department of Energy, and plans to explore the interface of polaritonics, atomic physics, condensed matter physics, and quantum electrodynamics from a theoretical and computational perspective.