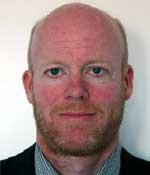 
Dr. Niels Madsen is Reader at the Department of Physics, Swansea University. He received his Ph.D. in physics on laser-cooling of ion beams in 1998 from the University of Aarhus, Denmark. Subsequently he was awarded a CERN fellowship to work on the Antiproton Decelerator (AD) at CERN. In 2001 he started work on antihydrogen as part of the ATHENA collaboration, who subsequently were the first to make low energy antihydrogen in 2002. In 2003 he was awarded a Steno Fellowship by the National Danish Research Council to work towards antihydrogen trapping. He identified key stumbling blocks for the path to antihydrogen trapping in the then standard schemes for producing the antiatoms. He was furthermore part of the team that pioneered the ALPHA collaboration. Since 2005, where he joined Swansea, he has led a group within the ALPHA collaboration that has made substantial contributions to the development of plasma physics techniques allowing the formation of trappable antihydrogen. In 2010, he was awarded a Royal Society Leverhulme Trust Senior Research Fellowship. This work led to the first trapping of antihydrogen in 2010. He is now, as part of the ALPHA collaboration, focusing on work towards precision comparisons of antihydrogen and hydrogen. He is a member of the American Physical Society and the Institute of Physics.