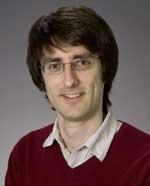 
Nikolai Tolich received a B.Sc. degree from the in 1997. In 1999 he received a M.Sc. from the where he made a precise measurements of the 14O superallowed beta decay working under the guidance of Professor Paul Barker. Nikolai then moved to where he worked on the KamLAND experiment under the guidance of Professor Giorgio Gratta. He was awarded a Ph.D. in 2005 for his measurement of neutrinos originating from the Earth.

Following his Ph.D. he worked at Lawrence Berkeley National Laboratory on the Sudbury Neutrino Observatory (SNO) experiment measuring neutrinos coming from the Sun. He is currently an Assistant Professor at the University of Washington in Seattle, where he continues to search for neutrinos from the Sun and Earth, and is involved in the SNO+ neutrino-less double-beta-decay experiment.