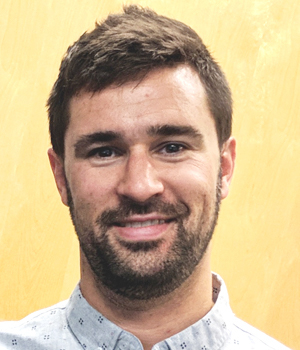 
"For the development of electron-plasma-based techniques to study two-dimensional vortex dynamics in the presence of strong external flows and for investigation of the stability and self-organization of vortices in strain flows."


Noah Hurst began studying plasma physics as an undergraduate at the University of Wisconsin – Madison, completing a B.S. Degree in 2011 with a focus on aerospace engineering and physics. Under the guidance of Prof. Daniel Den Hartog, he helped design and build a control system for a custom laser system for high-repetition-rate Thomson scattering on the Madison Symmetric Torus. He then accepted a graduate position at the Department of Physics, University of California San Diego and began studying non-neutral plasmas in the laboratory under the guidance of Prof. Clifford Surko. Early in his graduate career, he investigated methods for high-capacity lepton storage using a multicell electron plasma trap. Motivated by this research, he developed an experimental technique to study two-dimensional vortex dynamics in the presence of externally imposed flows using a novel electron plasma apparatus. Dr. Hurst completed his Ph.D. thesis in 2018 and continues to work on the same project as a postdoctoral researcher under the Department of Energy Fusion Energy Sciences Postdoctoral Fellowship program. He has been a member of the American Physical Society since 2010. His primary scientific interests involve the stability and nonlinear dynamics of coherent structures in quasi-two-dimensional plasma and fluid systems.