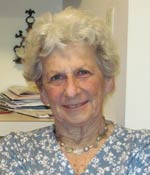 
"For unselfish commitment to advocating the freedom of scientists around the world and for leadership in fostering equal opportunities for women in science."


Noemie Koller is an Emerita and Research Professor at Rutgers University. She received her BA from Barnard College (1953) and Ph.D. from Columbia University (1958) under the direction of Professor C.S Wu. After a postdoctoral stay of two years at Columbia she moved to Rutgers as an Assistant Professor and has been there ever since.

She has been mostly active in nuclear structure with a focus on properties of low-lying nuclear states. Currently she is interested in measurements of magnetic moments of short-lived nuclear states and in the hyperfine interactions between swift excited nuclei and an atomic or solid matter environment. She has extended these measurements to exotic nuclei far-from-stability and to studies of magnetic materials.

She has been active in international physics and human rights of scientists through scientific collaborations as well as work on advisory committees. For the last decade she has served on the APS Committee for the International Freedom of Scientists (CIFS), the AAAS Committee for Scientific Freedom and Responsibility (CSFR) and the NY Academy of Sciences Committee on Human Rights. She played an important role in advancing the status of women in physics and Academia.