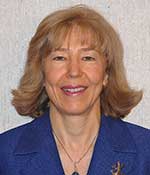 
"For pioneering experiments on the interaction of atoms, molecules, negative ions and clusters with ionizing vacuum ultraviolet and soft x-ray photons."


Nora Berrah is a Professor and Head of the Physics Department at the University of Connecticut in Storrs. She received her Diplome D'ètude Superieure in Theoretical Physics from the Faculté des Sciences, USTHB, d’Alger, Algeria in 1979, and her PhD in experimental atomic physics from the University of Virginia in 1987. She was a distinguished faculty scholar at Western Michigan University (1991-2013). Her research interests are in the investigation of the interaction of atoms, molecules, clusters and their ions with weak and strong electromagnetic fields produced by synchrotron facilities and lasers. Her recent interests are in the areas of non-linear physics, with emphasis on short wavelength radiation, ultrafast time scales and strong laser fields to probe physical and chemical processes that occur on ultrafast time scales. She is a member of the American Physical Society. She promotes diversity nationally and internationally to increase the number of women in physics and in STEM fields. She received a Humboldt Fellowship from the Alexander von Humboldt Foundation, Germany, the David. S. Shirley Award for Outstanding Scientific Achievements at the Advanced Light Source, LBNL, a Chair d’Excellence from SOLEIL National Synchrotron Laboratory, France and is a Fellow of the American Physical Society.