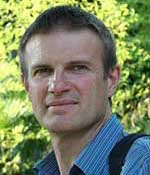 
Olivier Sauter obtained the Physics Ing. Diploma at EPFL in 1986 and his PhD at CRPP-EPFL, Lausanne, Switzerland in 1992 where a new method, at the base of present most powerful 2D full wave codes used for burning plasmas, was developed. A following post-doc at General Atomics in 92-93, contributed to the Fokker-Planck CQL3D and CQLP codes, where the Fokker-Planck equation is solved along the magnetic field line. These codes were employed to deduce generic coefficients to calculate the bootstrap current density in tokamak plasmas, in worldwide use to the present day. In 95/96 he spent 18 months with the ITER Joint central team in San Diego working on MHD in long pulse discharges, for ITER scenarios, initiating his contributions to NTM physics. In 1999-2001 he was Task Force leader of the JET MHD task force. He led the experiments demonstrating the direct role of sawteeth on triggering NTMs in low beta long pulse discharges. He is a member of the Swiss Physical Society, a Maître d'Enseignement et de Recherches (MER) at the Polytechnic school in Lausanne, Switzerland and has directed several PhD thesis. He is active on the TCV tokamak in Lausanne in the domains of MHD stability, heat/particle transport and heating and current drive. He contributed to the demonstration the effectiveness of electron cyclotron current drive and the role of reverse shear on internal electron barriers using ohmic current drive perturbations. Recent activities revolve round real-time control of tokamaks with a demonstration of the importance of physics-based control and the identification of the importance of a non-stiff edge region, with respect to turbulence, indicating a new paradigm for heat and particle transport.