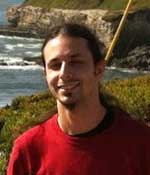 
"For creative and novel use of the hard xray free electron laser to isochorically create high density plasmas and accurately measure the ionization potential depression, and for new theory that addresses discrepancies with long standing models and provides stimulus for continued developments."


Orlando Ciricosta received a degree in physics in 2006 and a master's degree in condensed matter physics from the University of Pisa, Italy in 2010. He received his Ph.D. in atomic and laser physics from the University of Oxford in 2014. His doctoral work includes experiments and modelling on the novel isochoric heating platform that uses an X-ray free electron laser to generate hot-dense plasmas, and relating the X-ray emission from these plasmas to a direct measurement of ionization potential depression. He is currently a postdoctoral fellow at the University of Oxford, and a visiting scientist at the Lawrence Livermore National Laboratory, his main reaserch effort being devoted to a collaboration between the Univerisity of Oxford, the University of York, the Laboratory for Laser Energetics, and the Lawrence Livermore National Laboratory on the spectroscopic investigation of hot-spot mix in fusion-caspule implosions at the National Ignition Facility.