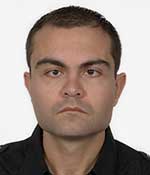 
"In recognition of outstanding contributions to the theory of three dimensional effects in free electron lasers."


Panagiotis Baxevanis received his undergraduate degree in physics from the University of Thessaloniki, Greece, in 2009. Upon graduation, he was admitted to Stanford University where he received his Ph.D. in physics in 2015. His thesis research, supervised by Professors. Ronald Ruth and Zhirong Huang of the Stanford Linear Accelerator Center (SLAC) Accelerator Laboratory, focused on theoretical topics relevant to advanced schemes for compact, high-gain, X-ray-free electron lasers (X-FELs). In the course of this work, Dr. Baxevanis emphasized FEL concepts that utilize the high-brightness electron beams from plasma-based accelerators in order to generate intense, coherent X-rays. Panagiotis’s research provided a systematic, self-consistent, and fully three-dimensional theoretical analysis of such FEL configurations, which typically involve novel components such as transverse gradient or laser-based undulators. After receiving his Ph.D. in 2015, Dr. Baxevanis  was named a post-doctoral scholar in the FEL and Beam Physics Department at SLAC. His current research interests include FEL theory and simulation development, design and optimization of compact FEL schemes, and the study of methods to generate ultrashort X-ray pulses in an FEL.