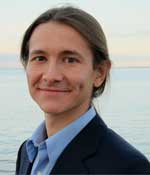 
"Equilibrium and stability in vortex and wave flows."


Paolo Luzzatto-Fegiz graduated with a BEng in Aerospace Engineering from the University of Southampton in 2003. He spent the following summer working with the ATLAS Magnet Team at CERN, and subsequently completed an MSc in Applied Mathematics at Imperial College in 2004, and an MS in Aerospace Engineering at Cornell University in 2007. His PhD thesis focused on equilibrium and stability of vortex and wave flows, and was advised by Charles H.K. Williamson. After defending his PhD in December 2010, Luzzatto-Fegiz worked as a Postdoctoral Research Associate at Cornell. He is presently the Devonshire Postdoctoral Scholar at the Woods Hole Oceanographic Institution, where he works with Karl R. Helfrich and Claudia Cenedese. His current interests include vortex dynamics, fluid stability, and large-amplitude internal waves.

At Southampton, Luzzatto-Fegiz was awarded the James Graham prize for best experimental project in the School of Engineering Sciences, together with the Royal Aeronautical Society Prize for highest first class degree. While at Cornell, he was awarded a Cornell University Graduate Fellowship, as well as the Bolgiano Outstanding Teaching Assistant Award.