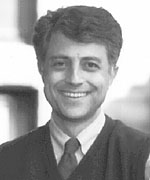 
"For his pioneering work of direct numerical simulation and large-eddy simulation of turbulent flows in the study of turbulence physics, modeling and control; for developing novel approaches in turbulence research using a computer-generated database as the primary resource; and for his leadership in the international turbulence research community as the founding director of the Center for Turbulence Research."


Parviz Moin is the Franklin P. and Caroline M. Johnson Professor of Mechanical Engineering at Stanford University. He received his Bachelors degree in Mechanical Engineering from the University of Minnesota in 1974 and his Masters and Ph.D degrees in Mathematics and Mechanical Engineering from Stanford in 1978. He held the posts of National Research Council Fellow, Staff Scientist and Senior Staff Scientist at NASA Ames Research Center. He joined the Stanford faculty in September 1986. Prof. Moin is the founding director of the Center for Turbulence Research at Stanford and NASA Ames. Established in 1987 as a research consortium between NASA and Stanford, CTR is devoted to fundamental studies of turbulent flows. CTR is widely recognized as the international focal point for turbulence research, attracting diverse groups of researchers from engineering, mathematics and physics.

Prof. Moin pioneered the use of direct and large eddy simulation techniques for the study of turbulence physics, control and modelling concepts and has written widely on the structure of turbulent shear flows. His current interests include: interaction of turbulent flows and shock waves, aerodynamic noise and hydro-acoustics, turbulence control, large eddy simulation and parallel computing. He has been awarded NASA's Exceptional Scientific Achievement Medal, Space Act Award, the Lawrence Sperry Award of the American Institute of Aeronautics and Astronautics, and the Humboldt Prize of the Federal Republic of Germany. Prof. Moin is a Fellow of the American Physical Society.