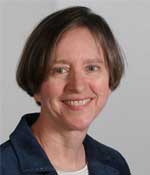 
"For seminal contributions to surface structure and dynamics of complex metallic alloys, including quasicrystals and kinetically limited growth and relaxation of nanostructures in thin metal films."


Patricia A. Thiel is a Senior Scientist in the Ames Laboratory, and a Distinguished Professor of Chemistry at Iowa State University. Her current research areas include nanostructure evolution on surfaces, and surface properties and structures of complex metallic alloys, including quasicrystals. She earned her B.A. in Chemistry at Macalester College in 1975, and her Ph.D. in chemistry at the California Institute of Technology in 1981.  After postdoctoral work at the University of Munich as a von Humboldt Fellow, she joined the technical staff at Sandia National Laboratories, Livermore, then moved to Iowa State University in 1983, where she was recognized with awards from the Camille and Henry Dreyfus Foundation and the A. P. Sloan Foundation, and by an NSF Presidential Young Investigator Award. Later, she was elected a Fellow of the AVS, the APS, and the Institute of Physics. She has been an Invitation Fellow of the Japanese Society for the Promotion of Science, has received an Honorary Degree from the Institut National Polytechnic de Lorraine in France, and has received a DOE Award for Outstanding Scientific Accomplishment in Materials Chemistry. She has served on numerous boards and committees for major organizations, including NSF, DOE, ACS-PRF, and NIH, and has been a member of editorial advisory boards for 10 journals. She has organized conferences and symposia within the frameworks of the MRS, APS, ACS, AVS, and GRC organizations. She has authored or co-authored about 250 publications, and has co-edited 4 books.