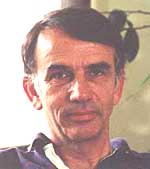 
"For his distinguished leadership and vision in the conception, design, construction, and execution of the D0 experiment at the Fermilab Tevatron proton-antiproton collider. His many contributions have been decisive in all aspects of the experiment."


Paul Grannis received the B. Eng. Phys. degree from Cornell University in 1961, and the Ph.D. from the University of California at Berkeley in 1965, under the direction of Owen Chamberlain. Since 1966, he has been on the faculty at the State University of New York at Stony Brook, with guest appointments at Fermilab, CERN, the Rutherford Laboratory, and University College London.

His primary past research was conducted at the Brookhaven AGS and the CERN ISR and LEP colliders. In 1983, he was asked to form a collaboration to design and build a collider detector at the D0 intersection region of the Fermilab proton-antiproton collider, complementary to the planned CDF detector. As spokesman for D0 from 1983 to 1993, and co-spokesman with Hugh Montgomery from 1993 to 1996, Grannis led the D0 experiment from its inception through the end of Tevatron Run I. D0 extended our understanding of particle physics through its co-discovery with CDF of the top quark in 1995; precise measurements of the W boson mass and couplings; extensive studies of QCD using jets, gauge bosons and b-quarks; and searches for a variety of signatures of new physics. These accomplishments reflect the work of all in the D0 collaboration, and these colleagues share the honor of this award.

Grannis is Distinguished Professor at Stony Brook, has received Alfred P. Sloan and J.R. Guggenheim awards, and is a Fellow of the APS.