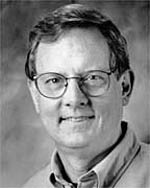 
"For pioneering contributions to the development of biological scanning probe microscopy and for the molecular resolution imaging of biological molecules in aqueous solutions."


Dr. Paul Hansma received his undergraduate degree from New College in Sarasota Florida and his Ph.D. in physics from the University of California at Berkeley. He worked on electron tunneling and Josephson junctions.

From Berkeley he went, as an Assistant Professor, to the University of California at Santa Barbara. There his research evolved through inelastic electron tunneling and Scanning Tunneling Microscopes to Atomic Force Microscopes, AFMs. He has a particular interest in making AFMs for applications in biology and medicine. He collaborates on these applications with many biologists, especially his wife of 30 years, Helen, a biochemist, who has her own grant to explore biological AFM applications.

Now, as a result of about five year's research, his group has prototypes for a new generation of AFMs that can use cantilevers on order of magnitude smaller than used in current commercial AFMs. These new AFMs can monitor the motion of individual protein molecules and help answer fundamental questions of single molecule biomechanics such as: what are the molecular actuators in proteins and how do they use chemical energy to generate forces and motions?

He is a fellow of the American Physical Society, and the American Association for the Advancement of Science.