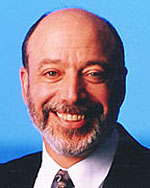 
"For his innovative contributions to the understanding of 1/f noise, the elucidation of surface phases and phase transitions, and his signal achievements in managing IBM Corporation's global research team."


Dr. Paul M. Horn was named Senior Vice President of the IBM Corporation and Director of Research, on January 1, 1996. In this job he directs IBM's worldwide Research program with 3200 technical employees in eight sites in five countries around the world, and helps guide IBM's overall technical strategy. In his 22 years with IBM, Dr. Horn has been a champion for translating technology based research into marketplace opportunities. Trained as a solid state physicist he has held, key management positions in science, semiconductors, and storage; successfully applying these disciplines to solving real world technology problems. Dr. Horn's top priority as head of the Research Division is to stimulate innovation in key areas of e.business and quickly bring those innovations into the marketplace to sustain and grow IBM's existing business, and to create the new businesses of IBM's future. Prior to his present appointment, Dr. Horn was Vice President and Lab Director of the Research Division's Almaden Research Center in San Jose, California which is responsible for creating novel data centric and pervasive computing solutions for businesses, and new disk drive and storage systems products.

Born in New York, Dr. Horn graduated from Clarkson College of Technology and received his doctoral degree in physics from the University of Rochester in 1973. Prior to joining IBM in 1979, Dr. Horn was assistant and associate professor in the Physics Department and the James Franck Institute at the University of Chicago. Dr. Horn is a Fellow of the American Physical Society and was an Alfred P. Sloan Research Fellow from 1974-1978. He is a former Associate Editor of Physical Review Letters and has published over 85 scientific and technical papers.

Dr. Horn has received numerous awards including the 1988 Bertram Eugene Warren award from the American Crystallographic Association, the 2000 Distinguished Leadership award from the New York Hall of Science, and the 2002 Pake Prize from the American Physical Society. He is also a member of numerous professional committees including the Washington based GUIRR (Government University Industry Research Roundtable), the Clarkson University Board of Trustees, the UC Berkeley Industrial Advisory Board, the Gallaudet University Advisory Board, and is a Board Member of the New York Hall of Science.