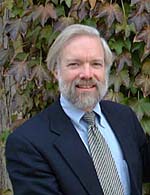 
"For their critical contributions to the investigation of vibrationally- and rotationally-resolved molecular photodissociation and reaction dynamics, in particular for the invention and development of the photofragment ion imaging method."


Paul Houston was born on January 27, 1947 in Hartford, Connecticut. He received his BS from Yale University (1969) and his PhD from MIT (1973). Following postdoctoral work at the University of California at Berkeley (1973-75), he joined the faculty at Cornell University, where he is now Peter J. W. Debye Professor of Chemistry (1999-) and Chairman of the Department of Chemistry and Chemical Biology (1997-2000). He is also a member of the Cornell Center for Materials Research and the Field of Applied Physics. Dr. Houston has held visiting positions at the Max Planck Institute for Quantum Optics (1982), Columbia University (1986, 1987), and the Institute for Molecular Science (1989). He has been an Alfred P. Sloan Research Fellow (1979-81), a Camille and Henry Dreyfus Teacher Scholar (1980), and a John Simon Guggenheim Fellow (1986-87). He has served as a Senior Editor of the Journal of Physical Chemistry (1991-97), as Chair of the APS Division of Laser Chemistry (1997-98), and as a member of the Science and Technology Steering Committee of Brookhaven National Laboratories (1998-). Houston has authored or co-authored approximately 130 publications in the field of physical chemistry and a textbook on chemical kinetics.