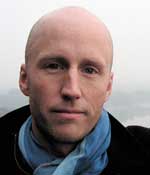 
"For his role in the discovery of quark number scaling in the elliptic flow of hadrons in nucleus-nucleus collisions, and its interpretation showing the relevance of quark degrees of freedom in heavy ion interactions."


Paul Sorensen was born in 1972 in Corbett Oregon and developed an interest in physics while studying art at Mount Hood Community College. Transferring to the University of Nebraska  Lincoln, he earned a B.S. in physics in 1996. Sorensen went on to earn an M.S. and Ph.D. in physics, both from the University of California, Los Angeles, in 1999 and 2003, respectively. Sorensens thesis was awarded the RHIC and AGS thesis award in 2003. He was a postdoctoral researcher at DOEs Lawrence Berkeley National Laboratory for two years before joining Brookhaven Lab in 2005 as a Goldhaber Distinguished Fellow. Sorensen is the lead author of 16 peer-reviewed publications, accruing more than 800 citations. Sorensen recently became an associate physicist at Brookhaven. His current research within the STAR collaboration focuses on the phase diagram of nuclear matter.