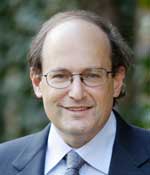 
"For pioneering contributions to the theory of quasicrystals, including the prediction of their diffraction pattern."


Paul J. Steinhardt, the Albert Einstein Professor in Science and Director of the Princeton Center for Theoretical Science, is in the Department of Physics and the Department of Astrophysical Sciences at Princeton University.  He received his B.S. (Physics) at Caltech in 1974;  M.A. (Physics) in 1975 and Ph.D. (Physics) in 1978 at Harvard University. He was a Junior Fellow in the Harvard Society of Fellows from 1978-81 and on the faculty of the Department of Physics and Astronomy at the University of Pennsylvania from 1981-98, where he was Mary Amanda Wood Professor (1989-98). He is a Fellow in the American Physical Society and a member of the National Academy of Sciences.  He received the P.A.M. Dirac Medal from the International Centre for Theoretical Physics in 2002 for contributions to the inflationary theory of the universe.  He co-edited Physics of Quasicrystals and Quasicrystals: The State of the Art; he also co-authored Endless Universe: Beyond the Big Bang.  His current research is on inflationary cosmology and an alternative, known as the `cyclic universe; the properties of synthetic quasicrystal and disordered dielectric structures with application to photonics; the search for natural geological sources of quasicrystals; and theories to explain quasicrystal growth and stability.